Parents can save $10.00 by registering by Jan 1 2022.  Fee includes jersey for player to keep.  If player was in PAAL last year and jersey still fits then cost of jersey will be deducted from fee.

Parents can save $10.00 by registering before June 15th.  Fee includes game jersey for all players to keep.

Parents can save $10.00 by registering before the end of May 15th.  Fee includes event uniform for all Cheer TEAM members to keep.

Parents can save $10.00 by registering before April 20th.  Fee includes game jersey for all players to keep.

Our PAAL program is a Kindergarten through 6th grade instructional league.  The PAAL season begins at the end of February, when grade school team basketball typically ends.  Our season runs through May, ending before schools recess for the summer. The first week of April is often when we host a long-standing Columbus Basketball tradition, the PAAL Basketball Jamboree. It is a full day and evening of playing basketball at either the Columbus East or Columbus North High School gyms.

PAAL Football is a developmental program for pre-Kindergarten through 6th grade.  Our stair-step approach to teach the game keeps the activity fun for both the players and their parents.  The Cadet League of pre-K->1st grade is a flag league, that uses Gamebreaker soft-shell helmets.  They play is on a 45-yard x 30-yard wide, field.  The Sergeants League is made up of 2nd graders, and is our Tackle-Bar League.

The Sergeants League is made up of 2nd graders, and is our Tackle-Bar League.  They play on a 45-yard x 30-yard wide field  The emphasis becomes learning proper footwork to stay ahead of the play, while completing a 'tackle' by pulling a styro-foam bar.  Players are not taken to the ground in this league.  The Majors League belongs to the 3rd and 4th grade, and is a tackle football division, that plays on a half-scale field size.  Line play is in a 2-point stance, where the speed of blocking acquisition is most evenly matched, across skill and athletic capability levels.  Our Colonel League is our 5th and 6th graders, and is a tackle football league on a full size field.

The PAAL program is offered, based on school grade.  Teams practice and play games at the PAAL Complex.  Teams play a 6-game regular season followed by single elimination tournament and Championship game for both the Major and Colonel tackle football divisions.  The Championship games are played on either the Columbus East or Columbus North Football Fields, where the 'big kids' play!

The cheer program is run by Heather Lee with instruction provided by a local high school cheerleader. This is their second season back with program after a long hiatus. Group performs at one game per division each week. 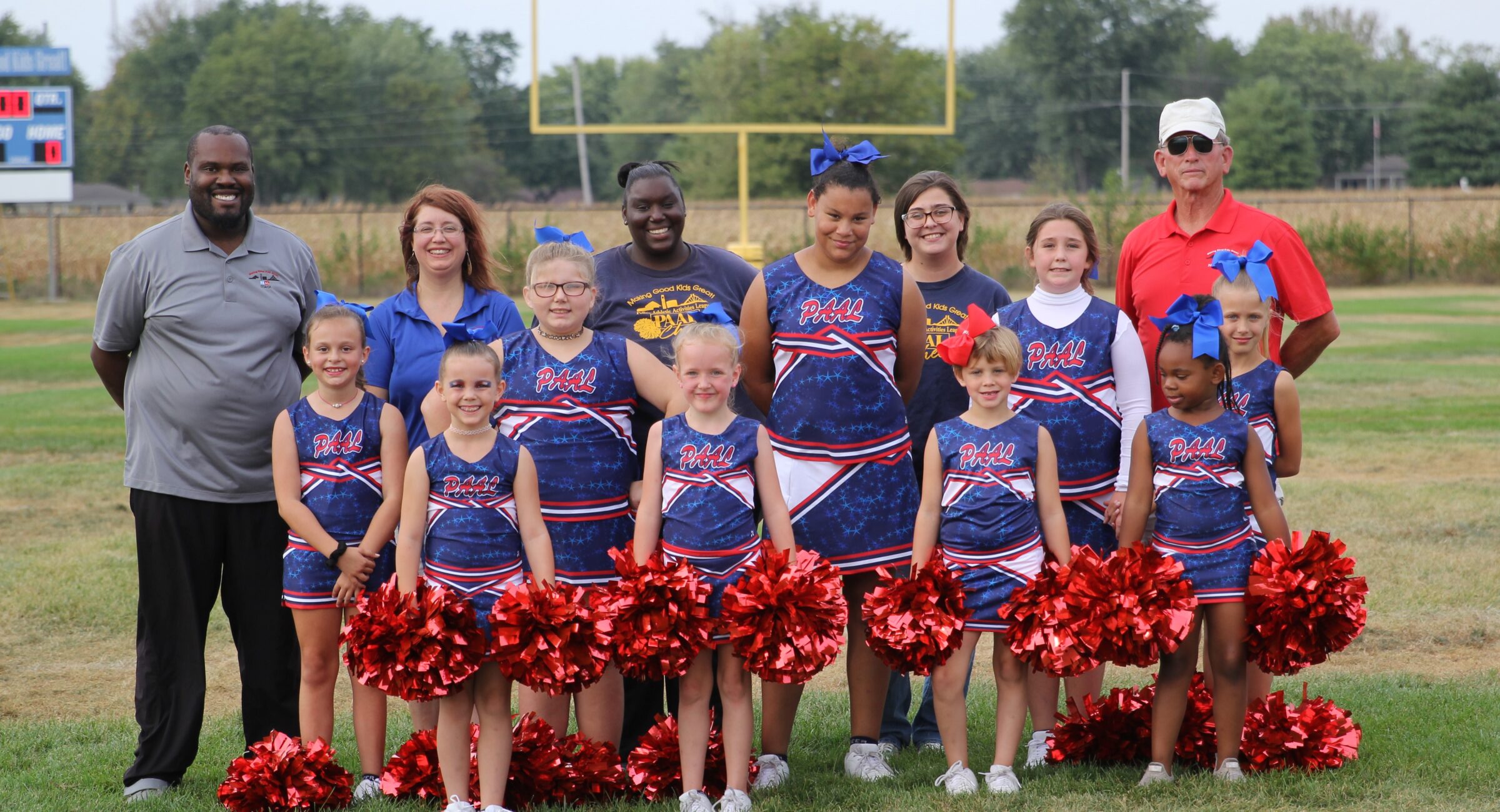 From finger-tip catches, to diving interceptions, or a quarterback threading the needle, it is this type of action that draws players and fans to the sport. 7on7 Young GunZ flag football offers this level of excitement while preparing players for our fall flag football and tackle league season, while providing another outdoor team sport opportunity for student-athletes. The PAAL 7on7 Young GunZ program goal is to foster the learning and development of all young football players. This addition to PAAL is a spring season, co-ed league, that offers players an opportunity to work on offensive and defensive skills within a passing focused, non-contact situation.

The smaller team environment places an emphasis on a higher level of personal instruction and encourages athletes to improve at each of the skill player positions. Registered players will be provided with a game jersey, shorts, and an equipment bag that the player will keep. PAAL will provide waistline belt flags and a soft-shell helmet. The players must provide their own mouthpiece and non-metal cleats or turf shoes.
Registration is open NOW and runs through May 9th. Practice begins May 17th with the playing season starting in May 27th and ending by July 2nd.

Registration Opens: Now through May 9th

PAAL is very proud to introduce our newest PAAL Booster Club Members.  This group is made up of Coaches and player-parents who have stepped up, desiring to be involved in the improvement of the PAAL programs. Current participants are Melissa Wilson, Danielle Williams, Jennifer Eggers, Cindy Smith,  Mike Wilson and Mike Silcox.  This group hosted the recent PAAL Football Call-Out event held at Columbus North High School, Max Andress Football Field.  We had 60-players attend this event.  They recently hosted a PAAL Movie Night at the PAAL Fields, showing the youth football movie "Facing The Giants".  Should more parents wish to become a part of this group, we are always seeking fresh ideas and your support.  Please contact us through this web-page or reach out to us at the PAAL Fields Concession Trailer.